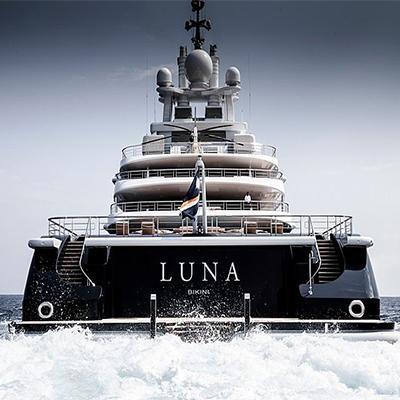 [vc_row][vc_column][vc_column_text]A Russian oligarch’s claim for $115 million in damages against his former wife, after a superyacht was impounded in Dubai as part of a costly divorce battle, has been dismissed by the emirate’s highest court.

The 115-meter MV Luna has been held in Dubai since February 2018 while lawyers for oil and gas tycoon Farkhad Akhmedov fought a UK court order that transferred it to his former wife, Tatiana Akhmedova.

Mr. Akhmedov and Straight Establishment – the current registered owner of the $450m vessel – initially brought the case against Ms. Akhmedova in January 2020.

The Dubai Court of Cassation rejected claims the arrest had been unlawful and that there were no grounds for further claims for alleged damages.

Mr. Akhmedov had hoped to recover “loss of opportunity and moral damages” on the basis that MV Luna could have been chartered out for the duration of its arrest.

The claim for lost hire fees ran contrary to Straight Establishment’s previous declarations that the vessel was not a commercial yacht and could not be used for financial gain, said Ms. Akhmedova’s legal team.

“This is the latest in a string of vexatious claims by Mr. Akhmedov that have been thrown out by courts in Dubai,” said Alessandro Tricoli of Fichte & Co, representing Ms. Akhmedova.

“The decision in Dubai is a major blow to Mr. Akhmedov’s attempts to evade the UK court judgment against him, and his efforts to reclaim the Luna from Ms. Akhmedova appear increasingly bleak.”

New York-based financiers, Burford Capital, provided Ms. Akhmedova with funding for her legal case in exchange for a share of up to 30 percent of any recovery from the $586m divorce case.

The court decision is binding and cannot be subject to further appeal.

The future of the yacht, however, remains uncertain after years of legal deadlock.

A spokesman for Mr. Akhmedov told The National the decision was “irrelevant” as a previous ruling had ensured his ex-wife could not remove the luxury vessel from Dubai.

“These damages claims were filed by Mr. Akhmedov and the trust which owns the yacht as a back-up to the main legal action in Dubai,” the spokesman said.

“This was to prevent Tatiana and her backers, Burford Capital, taking ownership of Luna. This action was successfully concluded in August when the Court of Cassation ruled in favor of Mr. Akhmedov, thus ensuring the yacht could never be seized from Dubai by his ex-wife.

“At that point the damages claim became irrelevant. Burford and Tatiana have not gained a penny from the rejection of damages claims. It is a pyrrhic victory.”

The yacht remains moored in Port Rashid, subject to injunctions obtained in the Marshall Islands and England by Ms. Akhmedova, which prevents the transfer of ownership of the vessel or its removal from Dubai.

Proceedings to determine the rightful owner of the yacht are ongoing in the Marshall Islands.

The yacht, which has 50 crew and two helipads, was impounded in Dubai and put into dry dock more than two years ago for the duration of the ongoing litigation after London’s High Court ordered Mr. Akhmedov to pay 40 percent of his $1.4 billion fortune to her.

The article was published in The National UAE on October 12, 2020