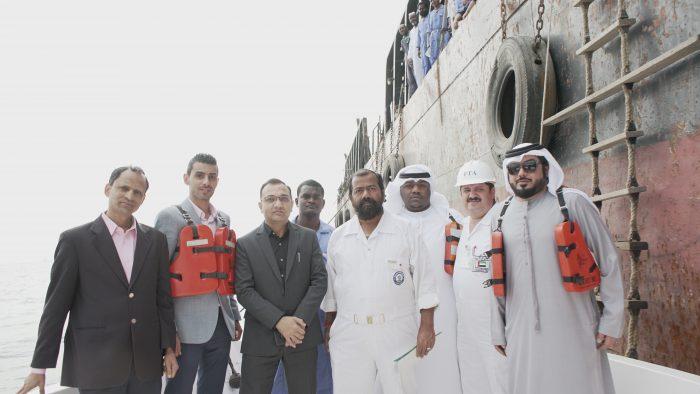 The first of seven ships abandoned at sea, with more than 30 crew on board, are being towed to shore after arrest warrants were served against a UAE firm.

It is the beginning of the end of almost three years of misery for some seafarers, locked in limbo without pay as their employers faced financial problems. With one tanker already in port, and likely to be sold for scrap to settle outstanding debts, other vessels in the abandoned fleet are due to follow. A total of 31 crew have been on board the seven ships, some since October 2016.

Some seafarers have already been repatriated, while the rest should be taken into shore next week. It is a huge relief for the merchant navy crew and their families, who feared they may face more delays with Ramadan approaching and the inevitable slow in proceedings due to reduced working hours.

“The Azraqmoiah crew were the most positive over the past few months, as their captain stayed focused and kept his men in good spirits,” said Andy Bowerman, chaplain at the Mission to Seafarers in Dubai, one of the charities offering food and water to the vessels. “Four of his crew were on their first voyage, and had paid $5,000 (Dh18,000) to a rogue recruitment agent in Mumbai to secure a place on the ship. “They have been paid nothing up to now. It is a terrible situation.”

Among all the crew there have been at least three family bereavements during their time away, and one baby has been born. Relationships have also ended. The shipping company involved is likely to face sanctions, including a heavy fine.

“We were most concerned about the crew on the Tamim Aldar, the ship furthest out,” Mr Bowerman said. “There will be an ongoing impact from this, and mental health issues will be there for months and years. “The captain there has been really struggling.”

Tough new measures drafted in over the past 18 months or so have bolstered shipping regulations in the UAE to end the abandonment of merchant navy sailors. Shipping operators now require compulsory insurance to cover crew salaries for up to four months, as well as repatriation costs. Other regulatory changes ban irresponsible owners from operating in the country, with improved monitoring of ships entering UAE waters. Ships will only be allowed into the country once valid certificates and insurance documents have been checked and approved under new anchorage rules.

Tankers older than 25-years are also now banned from shipping in the UAE. An automatic identification system is enforced on all ships, regardless of tonnage, so vessels can be monitored more closely.

“These measures are already leading to a rapid drop in the cases we are seeing,” said Hessa Al Malek, marine transport executive director at the Federal Transport Authority. “In the case of the MV Azraqmoiah, the ship is one of those belonging to the same UAE-registered company as other vessels under the same flag. “This was very alarming for us, so the FTA appointed a legal firm to arrest the ships belonging to the same company to protect the rights of the crew on board.”

Specialist shipping lawyers at Fichte and Co are acting on behalf of the stranded sailors, and activated arrest documents to bring one vessel, the Abdul Razzaq, into port at Dubai Maritime City.

Four Asian crew onboard are being repatriated after being at sea without pay for about 18 months. The men have been repaid in the region of Dh600,000 in total, covering their outstanding salaries and end of service payments. Other vessels belonging to the same company are in a similar situation. The Tamim vessel is about 22 kilometres off the Umm al Quwain anchorage and another, the Tamim Aldar tanker, is near Ajman. A fourth vessel, the MV Azraqmoiah is expected to be brought into port next week so the 10-man crew can be repatriated and paid the salaries they are owed, some $250,000.

“Once the MV Azraqmoiah is arrested, we will be more confident to repatriate the crew knowing their rights are secured by the court order,” said Ms Al Malek. “Leaving an unmanned ship at sea is not an easy decision, but the safety of the seafarers is our priority.” The owner of the UAE shipping company involved in the dispute met with the FTA last week.

Legal procedures will continue until the seafarers are paid and repatriated safely to their home country. The Indian Consulate General has also been working alongside the FTA to secure the crew’s release.

Captain Abdulla Al Hayyas, director of maritime transport at the FTA, said the MV Azraqmoiah tanker will be made safe before the sailors are taken into shore. “The ship will be secured at her anchor and it will be ensured her lights are working,” he said. “Her position and condition is monitored frequently by the authorities until we can find a safe berth. “The priority is to repatriate the seafarers, measures will be taken to ensure the ship is monitored and not causing a hazard.”

This article was first published on The National on Arpil 12th, 2019.