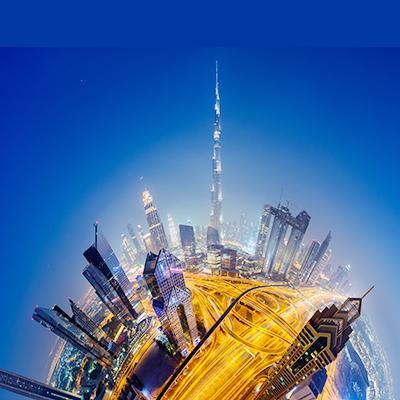 [vc_row][vc_column][vc_column_text]His Highness Sheikh Mohammed bin Rashid Al Maktoum, Vice President and Prime Minister of UAE and Ruler of Dubai has announced the launch of a new district combining the key commercial and financial hubs in Dubai and is dedicated to the development of the future economy under the name of ‘Dubai Future District’.

The Dubai Future District covers and connects Dubai World Trade Centre, DWTC, Emirates Towers and Dubai International Financial Centre, directly via a bridge inspired’ by the Museum of the Future, making it the Middle East’s largest district dedicated to developing the new economy. It will also house an economy research centre, incubators & accelerators and an innovative space for future economy pioneers which will boost the business sector of the country.

His Highness Sheikh Mohammed bin Rashid Al Maktoum also announced the launch of a Dhs1bn fund to support new economy companies who will operate out of Dubai Future District, and who have the “potential and foresight” to support the emirate’s position as a preferred destination for global talents and entrepreneurs. The new district, along with the new fund, will provide unprecedented financing and legislative facilities and options for businesses.

In order to support the economy of the future, overall, 10 initiatives will be launched in the coming period which includes:

1. Launch of an AED1 billion fund for future economy entrepreneurs in Dubai and the region which will provide support and facilities needed by tech startups in their early stages.

2. Office of Future Economy Companies is the second initiative, in which an office for future economy companies will be established which will issue special five-year residency visas to future entrepreneurs, licenses for innovative projects, provide banking facilities, offer legal services, and provide flexible work spaces, training services and workshops.

3. Legislative licenses will be offered to future economic entrepreneurs to test their innovations in designated areas.

4. Housing options at a reduced price will be made available for future economy pioneers.

7. The formation of the largest incubators and accelerators to assist future economy companies in their initial founding stages, by providing training in innovation and developing prototypes, in addition to providing an opportunity to benefit from the network of partners and available facilities.

8. Formation of Future Economy Research Centre which will contribute to the design of applied research through several specialised laboratories and will form a platform for scientific research.

9. This programme is aimed at cultivating the culture of entrepreneurship and encouraging students in the country to set up future economy companies. It will also provide services such as allocating workspaces, providing mentoring and guidance, educational materials, as well as opportunities to obtain grants and funding from government and private agencies.

10. International conferences and various global events will be hosted for future economy leaders to communicate through, explore growth prospects and present their projects to a larger audience.

For company formation in UAE mainland, freezone and offshore, please do not hesitate to reach us at, please email us at companysetup@fichtelegal.com or call +971 4 435 7577